I just got done watching the series: Guy Mariano – Life on Video. TheBerrics.com put out this series showcasing a legend in skateboarding and how he has grown up in front of lens of skateboarding. I think this is something that needs to be seen.

Here is the link: http://theskateboardmag.com/videos/?__mr_id=82550 and all five parts can be found on that site.

There is a new trend in skating and snowboarding that is pretty incredible. No, it’s not triple kinks or triple corks, it’s not tight pants, minimalist shoes, strange shaped boards, or grabbing your board when you carve. The trend i’ve noticed is spotlighting the legends of our sports.

As progression dictates; get better or get left behind (or as the tat on Antwuan Dixon’s head says, “get wit it or get rolled over bitch!”). This mandate applies for the people standing sideways as well as those pointing a lens at them. And although we will look at just about anything if the trick is amazing or new, there are lensmen that understand their art will be revered and remembered only if they dedicate the same passion to their projects as the riders do in pushing the sport. I’m not talking about just buying the best new camera and getting a clean shot. I’m talking about the thought that is going into projects and the final product that’s constructed through painstaking detail, research, and planning.

Some of the amazing new projects I see come in the form of a full length movie, some are webisodes, and some are profiles. As our sports enter the grandest of stages the production values are leading them to be presented to an ever growing, unknowledgeable, entitled audience. While some are content to throw up a snow park edit that looks like they pressed record when they got off the lift and stopped recording 10 runs later when they got to the car, others are taking the responsibility of educating and presenting what we do seriously. These artists are finding a canvas for their visions in the form of our sports’ history and pioneers. I can’t tell you how many kids snowboarding now don’t know who Terje or Craig Kelly are. Thanks to artists such as Stacey Peralta, Lucas Huffman, Trevar Cushing over at Powder and Rails, the guys at Vice, the production crew at the Berrics, along with many others, the history of our sports and the stories of our legends are being told. The value of this history is immeasurable as our sports steer away from their rebel roots and plant themselves firmly in the mainstream.

So please take some time to learn about who and where your sports came from. That thing under your feet wouldn’t be as fun or mean shit to the world if it weren’t for those that rode it before you. The Guy Mariano series has a lot of insight into the mind of a pro. If you want to know what its like or you long to be a pro someday then this is a playbook that has so much information for you.

And when you’re done with that here are a few other suggestions (and links if I can find them). 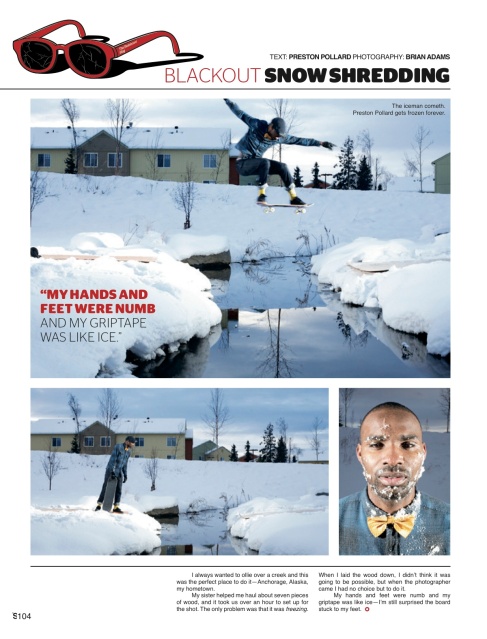 This week Preston Pollard is featured in this photo taken by Brian Adams in Alaska and printed in The Skateboard Mag.

Preston Pollard is more than a fine dressed young man. He is also the reigning Alaska State Tanning Champion. But putting the titles and glory aside Preston maybe the hardest working skater the state has ever seen. I don’t mean to take anything away from all the other kids on the grind but Preston is hustlin’ 24/7.

Some people see that I’m talking about a skater and immediately think hustlin’ has a negative connotation. That’s ok because skating was better when they hated us but that’s not what i’m talking about with Preston. I’ve skated with preston for about ten years and he has always been hyped on it. Not the ordinary hype that just getting on a board gives you, rather you could see that Preston genuinely loved it and would fight for every minute he could be on his board.

Being a skater, meaning that is basically your job, and being from AK mix like oil and water. A few have done it but the odds are really stacked against them. That wasn’t acceptable to Preston. As you will read in the story, he is persistent and dedicated to following his dreams. Preston has carved out a niche for himself by being positive, upbeat, and talented. He has managed to do all of this while setting a great example for kids and sharing his faith.

Here’s what Preston had to say about the photo:

I was just featured in The Skateboard Mag this month!  What a lot of people don’t know is that it has taken me years to get into this particular magazine. I met Grant Brittain, one of the best skate photographers in the world, at a Ollie contest when was I was 20 at ASR Trade Show in San Diego.  After getting his card I looked at it and it said that he was the senior photographer and half Business owner of the Magazine. From that day forward I was persistent to get in to this magazine, I would email him any time I got new photos. He would tell me, nice photos but I have seen something like that before. I’m not going to lie I got discouraged.
This winter when I was in Anchorage I had an idea to Ollie over a creek but I didn’t know where I would do it until I found a perfect creek while driving. I came out a day early just to look at it and I was like wow I think it will work out. I ended up having some wood already but I bought some more wood just to make sure I got enough speed because I did not want to fall into the cold water.  I didn’t tell many people of my idea because they would think I was nuts, so I just told my sister and photographer Brian Adams.
We came out to the creek at 10am and it took about an hour to set up all the wood for the ollie. I was so thankful I had my sister to help me haul all those pieces of wood. I had a plane to catch around at 3pm so I had to hurry if I was going to do it. Brian came around 11am and he had a face of “I hope you can do this” look. He set up his camera and all eyes were on me! It actually didn’t take me to long to get over the creek, the only problem was that it was just so cold, “my hands and feet were numb and my grip tape felt like ice”
I ended up making my flight and when I got to my destination I was emailing different magazines about using the photo. What you might not know is that I didn’t have any sponsors at this moment I wasn’t going ask The Skateboard Mag because I got so many no’s. I said to my self what the heck why not ask again! I’m happy I did because that night Grant got back with me and said he wanted to use my photo. I didn’t give up even though I got discouraged. I believe God’s timing is perfect, for whoever is reading no-matter what your dream is don’t give up. The response to your dream could be 24 hours way!
Here is the video meeting Grant after!
http://www.youtube.com/watch?v=e7QfSwIOCPI 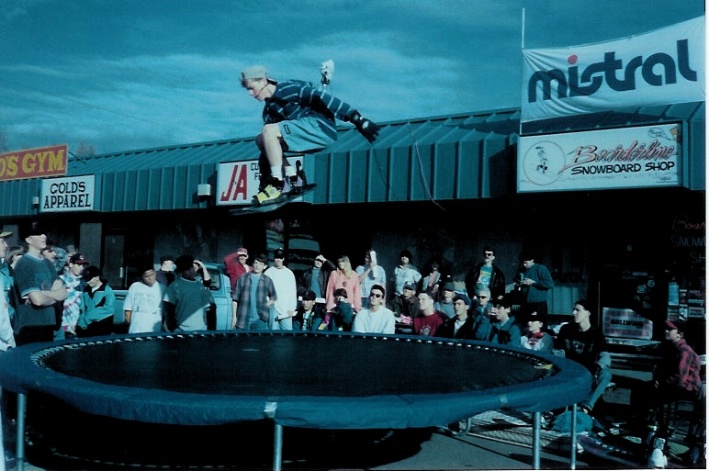 This week’s Throwback Thursday is from the fall of 1991. This is a trampoline contest. Back then it was all the rage to duct tape your edges up and hop around on the trampoline. When a bag of tricks was composed more of grabs than corks and flips (corks hadn’t even been invented yet) the trampoline helped develop some serious game. As you can see from the photo, it didnt do much for developing the wardrobe.

All the snowboarders from Eagle River would gather at someone’s house each day after school and the tramp sesh would be on. Due to the fact that people dont really jump on trampolines with their snowboards much may lead you to think in a different direction when I say “tramp sesh.” Fear not, we weren’t on the football team so it was just practice for snowboarding. I also had my own trampoline and was on it all the time, mostly because Craig  Kelly once said in a video that it helped with your balance and improved your snowboarding. Who was I to argue with the living legend?

As the fall grew colder and Boarderline announced the contest , we all got excited. It was the time when the air grows crisp and termination dust starts appearing on the mountain tops. Kids would start buying and watching the few videos that came out each season and talking about what tricks they would throw down as soon as the mountains opened. The trampoline contest was the time when all the shred clans from every area came together and  felt the hype of the upcoming season. Talk of who would do well in the contests that year, who had or would get on the Boarderline team, and who was going to throw down filled the air like the flakes of a dumping snowstorm.

The day of the contest I can remember that Jay Liska and Jimmy Halopoff were judges. I also remember that when the trampoline dust settled I ended up in second place.  I believe first place went to Jake Liska. Naturally I was convinced that a conspiracy on the scale of the JFK second shooter had occurred for those results to have been posted. I tried my best to pick up my dignity and my new Kombi gloves ( which were awesome because they had Kevlar on the fingers in case I needed to stop any further bullets coming from the grassy knoll) and headed back to Eagle River in time for my shift at Pizza Hut. Oh the glamorous days. Haha.

Oh and one last thing. I want you to notice that the Boarderline sign had Bart Simpson on it.

Magazine Mondays will be a new post every Monday featuring a picture of an Alaskan skater or snowboarder that has been published in print form. This means a real life, hold in your hands, tear it off and put it on a wall picture. There will also be a story or any interesting details about the circumstances of the picture as told by the rider. The idea is to show what Alaskans can and have accomplished in their struggles to live their dreams. I hope it also serves as a little inspiration to all the other kids that are trying to get sponsored, make it in the game, or just have something to show the girls so they can hook up.

This feature starts off with a bang. The first Magazine Monday is Jerry Smyth’s cover shot. “Lobster” is one of the funnest people I’ve ever skated with. He’s got a ton of energy, amazing skills, and a huge heart. Enjoy. 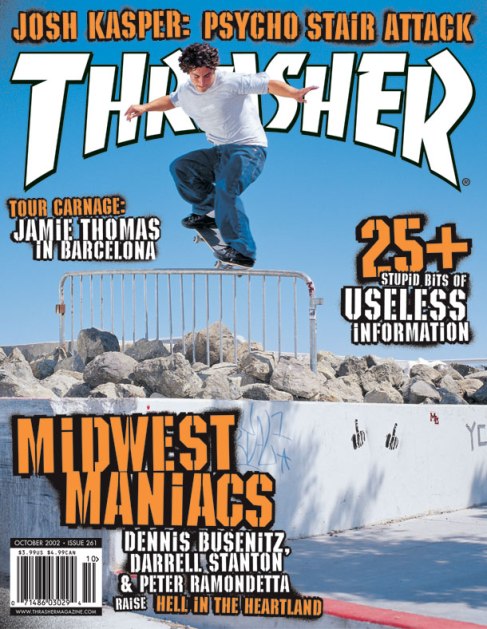 Jerry Smyth: “This was shot by Tony Vitelo, Fausto Vitello’s son who owned thrasher at the time. He had not shot a cover up until then. Jake Phelps didn’t want to use it because I was some un heard of dude. Tony didn’t care and got it ran. Right place, right time, right person…rather be lucky then good any day.”