Finally got a day off ( I say that just as I return from a three week hiatus during the remodel where I work) and it was sunny. Kelly and I headed up to Alyeska to take advantage of spring’s arrival. It was a beautiful day but the wind and passing clouds kept things just cool enough to be pretty crunchy still. It was one of those days where it was sooo close to being sick but it just didn’t get there. Never mind all that noise though, we were just excited to get some sun. Hibernation is ending in the great white north and it’s time for visibility to come out of it’s winter slumber.

By my estimation there are two types of mountain conditions that are fun to ride in. One is powder, duh. The second is when it isn’t powder but it starts to soften up and becomes “Nook and cranny” time. Nook and cranny time is where I slow down a bit and start searching the mountain for every little spot I can find to perform some Mountain Dew inspired extreme maneuvers. On our April fools day mission I was able to find a few nooks and one cranny.

Here are some pics. 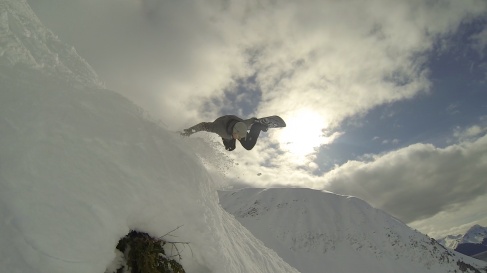 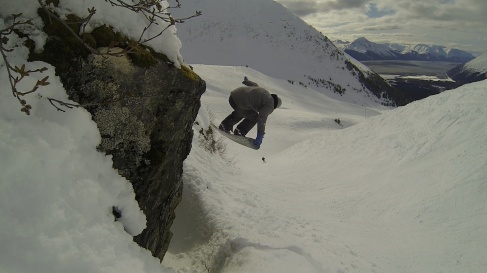 I also managed to narrowly avoid the wrath of a grumpopotimus. Kelly tends to get a little grumpy when she can’t get herself to try what she wants to try. There were some issues with the backside 360 progress and that sat about as well as a pea under the princesses mattresses. The funny thing about Kelly is her range of emotions connected to snowboard discontent. She’s grumpy when she can’t make herself try something or get it right and she gets mad, aggressively mad, when she get’s scared of something. We’ve had some interesting moments as I’ve tried to film her jump off a cliff or two that she was scare….. umm lets say she was cautious about hitting. Haha.

With all that said, I love it. I love that I get to ride with someone that is passionate and feels the emotion of snowboarding. I love that she feels the pain when she has trouble with tricks and that she explodes with joy when she conquers the task. It means that Kelly is in love with snowboarding. It means that it is deep in her heart and she cares about it. It means we are the same in that area of life. And all of that translates into me having more fun, riding longer, and being happier because I get to ride with her. That is as long as I can handle a little yelling when she gets gripped. 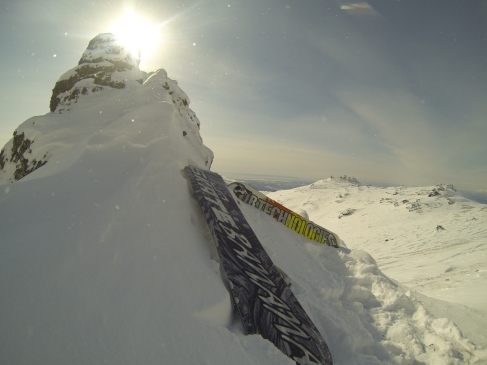 This is not the traditional magazine shot but the rules are somewhat loose here. As long as it’s been in print then it works. This was the promotional poster printed up for Alpenglow when they sponsored my movie “Nice! Gordon.” The main shot and the first of the three stacked photos are of myself. The karate kid is Andre Spinelli and the stylish backside 180 is Walter Bombeck. All the shots were taken by Alex “Lord have mertzy” Mertz. And only I can take credit for the ridiculous fake Burberry jacket.

I chose this one because I always have such a fond place in my heart for Alpenglow. The oh so popular diving board platform that I’m launching off seems like a great feature to mess around on but it serves as a reminder of the greatness that once occupied that space. The platform is the base of the top tower of the lift that was once on that side of the ski area. “The military side” as it was simply known was as simple as Paris Hilton’s mind yet held an endless potential for fun. The one lift was run by the military until it was shut down and the lift and lodge removed in 2003.

As I grew up in Eagle River, Alpenglow was the spot to be and the military side was the spot to get busy. The military side boasted a round lodge with a fireplace in the middle, a cook named TC that was the saltiest sweet old lady you ever met, and a manager named Jeff who’s hair-do had one of the meanest spiked parts and a solid mullet foundation. What they also had was a willingness to open the mountain to us and let a shredder shred. They gave us the freedom we sought and reeled us back in if we got out of line. And through that give and take a great deal of respect formed. It’s amazing how angsty teens will act if you don’t treat them like a fire that you’re sure will rage out of control the second you take your eye off of it.

I’m starting to turn this into a throwback thursday so I’ll try to pull it back. The photos were taken in the spring of 2004 when I was shooting “Nice! Gordon” and it was awesome to work with Alpenglow. The year before, when working with Jesse Burtner on “Steezin for no Reason”, Alpenglow also came through with help in the form of features to ride and film on. I was just really happy to be able to give the mountain some dues for all it had given me in my snowboard infancy.

I have always been incredibly proud to have come from Alpenglow and I was just as proud to feature the mountain in my movie. The coat I’m wearing…. well, I probably won’t be as proud of that down the road.

Thursday I’ll give you another shot from Alpenglow and tell some of the adventures that I’ve been through on that hill.