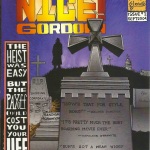 So over the last week I’ve been snowboarding a ton. There was a USASA slopestyle event, a little bit of pow, and even military mondays at Alyeska. It’s been fun riding and some not so fun riding. one thing that has become crystal clear is that Alyeska is a tough mountain when its not soft. More on that later.

Lets talk about throwback thursdays. This is the day that everyone posts photos of riding, clothes, boards, etc that are from their individual “good ole days”. The older the person is the more likely that the pictures are going to be interesting or extremely kooky. My pics tend to fall into the latter category. So for this thursday lets throw a couple up and discuss. This thursday’s shots will be from the Hilltop half pipe during the winter of 1990/91. I had been riding for about a year and just starting to compete. The pictures in the orange Patagonia jacket are from a practice session the day before a contest and the shirtless shot is, well, just being 15 and stoked i guess. At that time the routine consisted of watching Fall Line Film’s “Snowboarders in Exile” every day then going out and trying to tweak like Damian Sanders or Steve Graham. It was also a time of trying to figure out personal style while thinking I had my personal style completely locked down and dialed in. To me, I couldn’t have looked cooler than rocking a Spuds Mckenzie corduroy had with OR mitts. Looking back, I would have to say that I might taken another look at my kit and reevaluated it. But if you continue to follow this blog then my throwback thursdays will definitely show you that its been a long road of interesting style choices for me. Haha. 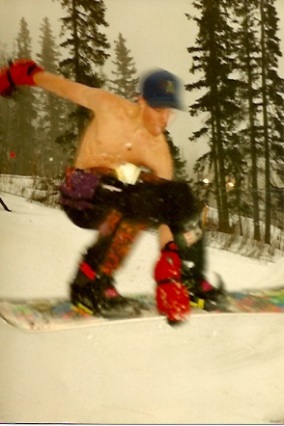 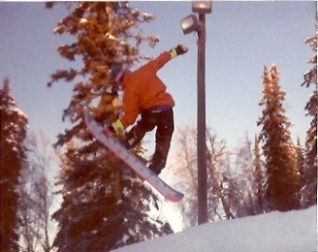 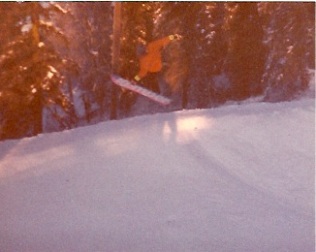 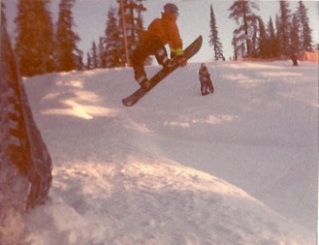 Another point that I find interesting is that right now I would kill to have this half pipe in Alaska. It was about 5 feet tall on a good day and usually icy as can be. But you know what? At least we had a pipe. I’m not sure what has happened to Alaska but it can be heart breaking to see how little effort is put in to the scene up here. We have three ski areas that used to all put in at least a showing of effort to fight for the snowboard demographic when it was minuscule. That leads me to believe it really wasn’t a fight for dollars or market share, it was simply an effort to innovate and provide a fun mountain to be on. I understand bottom line affects every business but I also know that being a slave to numbers, unwilling to acknowledge the subtext of the market, can be the death of a business. Right now Alaska seems to be going through a phase where one area is only open two days a week and has decided that playing it as safe as possible is the route to go. Another area is making efforts to have a park but seems to be having equipment issues. And the largest area, with the greatest amount of resources, has only put up a baby park and a baby pipe as of today. What’s going on around here? How did we have more interest in building jumps, pipes, boarder crosses, race courses, etc 15 years ago than we have now?

This subject deserves a lot more discussion and right now I have to get ready to head to Hilltop. So for now I’ll leave it alone but later tonight I’ll try to really lay some of my thoughts down. Until then I hope you like the old school pics and enjoy some of this pow thats falling.