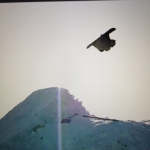 Pretty sick crew in this section. In no particular order, this section features the prince of anchorage, Andre Spinelli. The spoon man has had a lot of names over the years but B.A.D. (Big Air Dre) is probably the most fitting. Dre has a ton of pop and no fear when it comes to hucking. I feel like its pretty much just his stoke coming through as he rides.

Jed Hoffman has always been able to find some of the most unique and crazy rails featured in the videos. He transplanted from Fairbanks to Reno. Now a days you can find him crushing live poker games and tournaments in Reno and all around the country.

Walter is the third Bombeck brother that I have had the pleasure to spend a lot of time snowboarding with. I grew up around Abe and Kris Bombeck as we went to high school together and did our best to cause as much mayhem as possible at Arctic Valley. As Nice!Gordon came around so did the next generation of Bombeck rippers in Walter Bombeck. As you can see I would pick Walt up from school then head out to hit a jump or rail. I think Walt was only about 17 when we made the video yet he tackled some huge rails around town and went nuts on the AV hip. The Bombeck’s have always had an abundance of heart, talent, and siblings. I can look back now and see what a privilege it was to share so much time with this awesome family.

Sunny was a part of our scene for far too short of a time. Sunny passed away a few years after the movie and it hit our crew pretty bad. Sunny came to the shredfest events to ride for kids, tirelessly worked on jumps and rails for the videos, was present at anything that resembled a Boarderline snow/skate function, and made people smile because he was there. Sunny lived and breathed snowboarding and boarderline and created friendships that reflected that. We will always miss and love you buddy.